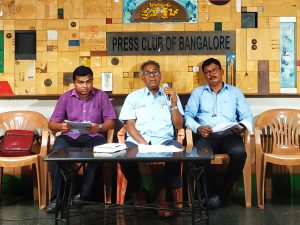 Government of Karnataka by notification no: LD 194 LET 2016 dated 25/05/2019 extended for further 5 years inapplicability of Industrial Employment Standing Orders Act 1946 to IT/ITES/Startups/Animation/Gaming/Computer Graphics/Telecom/BPO/other knowledge based industries on condition stated there in;-

That KITU had submitted a detailed memorandum opposing further extension to the Government of Karnataka on 03/01/2019 (Copy enclosed), which was further duly placed in the tripartite meeting convened by the Additional Chief Secretary of Labour on 25/01/2019.

The minutes of the meeting dated 25/01/2019 (Copy enclosed) clearly shows that for various reasons the further extension of the inapplicability of Industrial Employment Standing Orders Act 1946 cannot be considered to the establishments and it insists they were directed to frame similar set of service conditions with the help of the Joint Labour Commissioner, Government of Karnataka.

It is notable that the Government has not considered further extension till the IT management could manage matters in their favor and see to it that the present extension is obtained four months after the laps of the last date of inapplicability as per the notification 25/01/2014.

The extension given under Section 14 of the Industrial Employment Standing Orders Act, which is virtually use of a similar provision inserted in 1957 in Section 13-B making the Act not applicable to Government establishments like Ordinance factories, Railways etc., where the civil service rules are applicable instead of standing orders applicable in every industrial establishment.

The fact that a whole five year period from 2014 – 19 thousands of establishments which covered for conditional exemption from applicability of Industrial Employment Standing Orders Act did not consider it necessary to frame service conditions applicable to IT/ITeS sector workmen shows the futility of the conditional exemption further given now.

IT/ITeS sector employment in Bangalore especially happens to expand geometrically and outpace all other Industrial Employments. The Government of Karnataka itself has published estimated 3 million employments in IT/ITeS sector by the year 2020. If the Government considers that this huge population of working people need not be protected by Rule of Law it is to be condemned by the civil society which has emerged from Jungle law to civility.

KITU submitted to the Government that the exemption from Industrial Employment Standing Orders Act is made use of by the Employer as though they have received an exemption from all laws applicable to labour.

The practice in the Industry related to employment flouts all canons of justice. Freshely recruited employees are asked to deposit their certificate of qualification in original and huge penalities are demanded if the employees wants to discontinue their employment which in effect is a system of Bonded Labour prohibited way back in 1976.

Hundreds of establishments have been following the practice of employing contract workmen at various levels and tiers with total impunity without registering their establishments under Contract Labour Abolition (Regulation) Act 1970 and without statutory license as per the above Act.

The Employers resort to forcible lay off in total violation of chapter V-B of Industrial Dispute Act 1947 where by every establishment employing hundred or more workmen are required to obtain written permission of the Government before laying off/retrenching workmen.
A case in point is the threatened transfer of the substantial set of workmen from Bangalore to Dehradun by MPS Ltd Bangalore, which was successfully resisted by KITU so far.

KITU request the civil society through the fourth estate to take serious concern of the action of Government of Karnataka through wide publicity and that KITU has taken steps to challenge it under Article 226 of Constitution of India and also conduct a vigorous campaign physically and online against the violation of labour laws by IT/ITeS sector and similar establishments listed in the exemption order.

We request the press to give adequate publicity for the activities organized by KITU to compel the Government to rescind from the unjust Government order and get all labour laws implemented in IT and other related establishments.