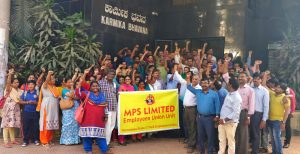 Management of MPS Ltd, Bangalore, forced to agree all the demands put forward by Karnataka State IT/ITeS Employees Union. A settlement is signed by both parties in the presence of Deputy Labour Commissioner at Karmika Bhavana, Bangalore today.

1. The Management withdrawn the decision to transfer 207 employees from Bangalore to Dehradun.

2. The pending appraisal will be given to all employees with arrears from April 2018

3. The irregularities in the salary slip and bonus calculation will be corrected

4. All the four terminated employees including KITU MPS Unit President Comrade Sridhara ML will be taken back

The decision was arrived at a bilateral discussion of MPS management and KITU leadership. KITU President Comrade VJK Nair, Secretary Sooraj Nidiyanga and the office bearers of the MPS Unit of KITU attended representing the MPS Employees. From the Management side Chief Financial Officer and Company Secretary Suneeth Malhothra and Chief Operational Officer and BAU head Srinivasa rao attended.

MPS Ltd, Bangalore, Employees were on struggle path from February 2018 against the management decision to transfer 207 employees to Dehradun. The company was harassing its employees individually to accept the transfer or face the wrath of dismissal. They were asked to resign forcefully by accepting a mere compensation amount of one month Basic salary. The Management resorted to a number of illegal terminations of those who questioned forced resignation. Several Senior Employees who have put in more than 20 to 25 years of service were facing untold mental agony due to the consistent and persistent intimidation and threatening by the Management. As a Union espousing the cause of workmen, KITU has raised an Industrial dispute in order to protect the employees of MPS Limited from the illegal and unjustified acts of the Management. As part of intervention, an immediate meeting of employees was called on 18th February 2018, which was the First General Body of MPS Unit and the meeting elected the unit committee. As the dispute was filed, company stopped the retrenchment.

While the matter was under the conciliation at Labour Department, violating the Section 33 of the Industrial Disputes Act the Management illegally terminated 10 KITU members including MPS Unit Secretary Comrade Honnesh Gowda on 18th Sep 2018. Immediately the MPS unit of KITU came in protest in front the company where hundreds of employees gathered and conducted a candle light vigil raising slogans against the inhuman acts of the Management. The next day union filed a dispute for violation of Section 33 of Industrial Disputes Act. Following which Management was forced to reinstate all the terminated employees along with continuity of service and back wages.

KITU congratulate the employees of MPS Ltd who stood with MPS Unit of the Union against the inhuman and illegal action by the Management.